ber, I wrote in The Right Thing column about how a young woman hiker from Quebec went out of her way to encourage my oldest grandson Evan the confidence he needed to complete his hike up Mt. Katahdin.
About a month later, Evan set as his new year's resolution the goal of climbing ten, 4,000-foot summits and raising $5,000 dollars for his school's environmental efforts. He called his project "Summits for My School" and started a blog where he writes about his climbs, offers environmental tips, and accepts donations via PayPal.

To date, Evan has received $5,120, from 123 people who have supported his project. That's 102 percent of his goal. And last weekend, Evan -- along with his younger brother, Lucas, his father, David, and me -- climbed Mt. Lincoln and Mt. Lafayette in New Hampshire to reach his goal of climbing ten summits this year.

I am very proud of Evan and Luke (who joined in on six of the ten climbs) and the project to try to accomplish a personal goal and make the world a little better place in the process. Evan's report on the latest climbs is on his blog. 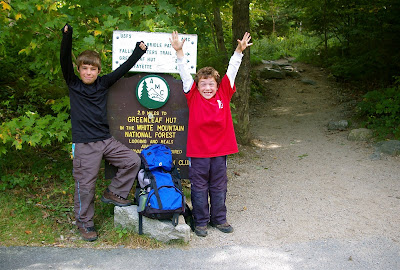 He is a senior lecturer of public policy and director of the communications program at Harvard's Kennedy School. He was an associate professor at Emerson College in Boston where he taught writing and ethics from 1999 until 2011.

He can be reached at jeffreyseglin@gmail.com.

To Run The Right Thing Column in Your Publication, Contact:

Do you have ethical questions that you need answered? Send them to jeffreyseglin@gmail.com.

Honored to be among those named...